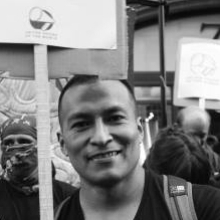 Percy is a cleaner at King’s college with 5 years on the job, and a UVW executive committee member, who’s been sacked after a disciplinary hearing he refused to attend due to observing the government’s social distancing guidelines but which King’s College proceeded with anyway in his absence without even letting him know or inviting him to attend via phone.

The hearing would have had 8 people cramped together in a small room in complete disregard of the government’s instructions about social distancing.

Percy has explained the reaons for not attending and asked for the decision to be overturned and the hearing to be reconvened via phone or in person after Lockdown.

However, King’s have scandalously refused this request and have insisted on upholding his dismissal which now leaves Percy out of work and out of pocket in the middle of a pandemic!

He will formally appeal but it could take months to hear and deliver an outcome. We will also take King’s to tribunal but that could take over a year.

This is utterly shameless conduct by King’s HR team.

Everyone deserves the right to a fair hearing and should not have that right denied them for respecting the government’s public health guidelines about social distancing.

Please write to Christopher Wellcome as below at the following address telling him to reinstate Percy and circulate this notice in the union and beyond:

I am writing on behalf of [union/branch/organisation] to register our dismay about the dismissal of Percy, a member of the cleaning staff at King’s College London.

As we understand it, King’s have summarily dismissed Percy following his non-attendance at a disciplinary hearing. Some questions need to be answered with urgency:

1)        Why was King’s attempting to hold a disciplinary meeting in the first place? In the midst of an epidemic, frontline workers like cleaning staff should be offered unconditional support and solidarity, not faced with punitive disciplinary action.

2)        What material conditions have been put in place to ensure the health and wellbeing of the cleaning staff at King’s College London? We note with extreme concern that by the 14th March – when all college buildings were still operational – there were at least five confirmed cases at King’s.

3)        Given the presence of covid-19 among the community at King’s, why didn’t the disciplinary meeting conform to social distancing guidelines? Why weren’t alternatives put in place, for example to hold the meeting via phone?

This failure of communication indicates to us a broader failure of communication around the covid-19 outbreak. We understand that members of staff at Kings– from cleaners to lecturers – have been justifiably alarmed about their working conditions. To hold a meeting in Percy’s absence and to terminate his contract is at the least disrespectful, and in the current climate strikes us as cruel and entirely unnecessary.

We note here that Percy was a prominent campaigner for the movement of the cleaning staff to become in-house employees of King’s. To be rewarded like this for his efforts reflects extremely badly on the University. The trade union movement are publicising Percy’s case and stand in solidarity with him and his colleagues.

We urge you to reinstate Percy with immediate effect.