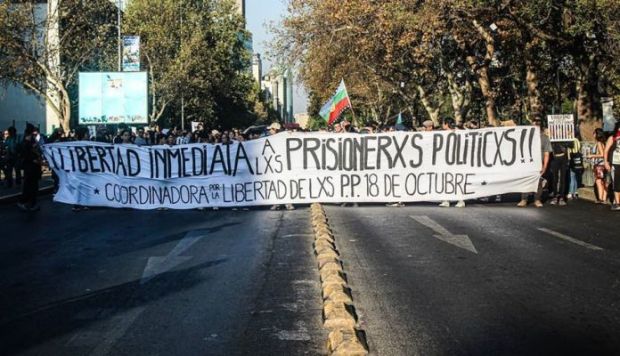 Please consider passing a motion at branch meetings, sending an email/letter as below and circulating this further in the union and beyond.

Mr. Sebastián Piñera Echeñique , President of the Republic of Chile

The undersigned members of the (union, party, entity, individual)

We are aware of the preventive detention of 2,500 political prisoners in Chile.  According to all the reports of the health authorities if overcrowding is not avoided and basic sanitary measures are not strictly followed, we will have to regret many deaths. The report of the Judicial Prosecutor of the Supreme Court of Chile states that overcrowding of prisons has become a time bomb.

We ask that you urgently release them all political prisoners who are currently in preventive detention, and instruct that they continue to comply with the Precautionary Measure in their homes with their families, in order to save lives.

Despite the fact that the pandemic slowed the process of the recent street mobilisation in Chile, the political and social contradictions continue to exist. One of the main ones is that of political prisoners who number 2,500 in preventive jail, that is, they have not been convicted of any crime, but the Chilean State has arbitrarily decided to keep them in prison as they consider them “dangerous for society”.

There is a blockade in the mass media. We must counter this blockade. Today, the thousands of families and activists who refuse to accept prison and the danger of contagion are in an isolated battle against the Chilean state as a whole. The left in general have forgotten the thousands of political prisoners.

We must continue to defend the Chilean labour movement. We cannot forget that the imprisonment of more than 2,500 activists is the product of facing one of the most bloodthirsty, repressive apparatuses in Latin America, which have already killed more than 30 comrades and mutilated more than 400 with shots in the eyes.

Although our focus here is a campaign for Chilean prisoners, we cannot lose sight of the fact that it is part of a general campaign for the freedom of political prisoners and the cessation of persecution throughout the world.

The coronavirus has already started spread in the prisons. There are several cases in the Puente Alto prison and also in the San Miguel women’s prison. This is very serious because the expansion of the virus in the confinement situation of prisons can be very rapid, and there are no health conditions to face an epidemic of cases. There have been protests by prisoners in some of the cells of the Santiago 1 prison, where they refuse to eat the food from the prison and demand that they let food from their relatives enter and send them home from prison.

The government, together with the majority of the parliament, proposed a law to change those aged over 75 who have not committed “serious” crimes to house arrest. This sparked a debate with the far right sectors of parliament demanding that the measures also be for those convicted of human rights crimes. A process was recently started to free 17 prisoners accused of committing human rights crimes.

The Organisation of Family and Friends of Political Prisoners (OFAPP) have raised the following demands: