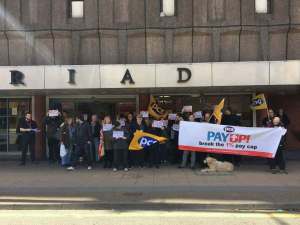 The last National Executive Committee meeting saw decisions taken on a number of issues, most prominently the pay campaign. A video update from Mark Serwotka gave us the headlines: departmental pay campaigning continues, and there will be members’ consultation meetings in the likes of HMRC and DWP. The legal challenge against the imposition of the pay remit goes to the High Court in the first week of October. Most crucially, if the pay cap remains next year there will be a further national ballot in the spring, one that we of course hope to win.

There was an extensive debate on pay at the NEC. Between now and a spring ballot there is a lot of work to do to put us in the best position to win that vote. The PCS Independent Left (IL) member of the committee, Phil Dickens, pointed out that there are essentially three strands to this: more effective organising across the board, a pay claim that captures the imagination, and a strategy members can buy into.

On organising, it’s welcome that there will be a further round of the training that came out before the last ballot. This was extremely well received and we believe it needs to be rolled out wider. It would also be helpful for this to be part of an ongoing programme to equip all reps with the knowledge and confidence to get their workplace organised.

IL also argued that the lay structures which emerged with the ballot, such as Town Committees, need to be nurtured and encouraged everywhere. The NEC agreed to this. Our other proposals, on utilising the skills of lay activists by possibly seconding organisers during any ballot campaign and incorporating the skills of local branches into a national media and communication strategy, wasn’t agreed at that meeting but will receive further consideration at the Policy and Resources Committee. Though this doesn’t guarantee anything, that the union is finally giving proper consideration to effective use of the skills our lay activists have is a good thing.

Mark Serwotka summed up the issue with our pay claim in an article for the Guardian: “Our own research shows that the effect of the pay cap will be that by 2020, average civil service pay will have fallen in value by more than 20%. Given what our members have had to put up with, our 5% claim this year was a moderate demand.”

Likewise, our current position on an industrial action strategy leaves much to be desired. We have moved away from holding a one day strike every few months. We have a fighting fund. We have run several consultations on forms of targeted and selective action that may be effective. But no strategy has been developed from that, indeed there was no intent to do so until we got a positive result. Worse, that we have moved from one day strikes hasn’t been effectively communicated to members on a nationwide scale.

Our Annual Delegate Conference in May will be too late to address either question for 2019, especially if we are balloting in spring. One alternative is a Special Delegate Conference on pay, but the majority on the NEC are opposed to this, preferring instead an “event” to launch the next phase of the campaign – effectively, a talking shop and photo opportunity.

So how do we address this, and get proper democratic input into our claim and strategy in time for a 2019 ballot?

There are two options at this point: a Special Delegate Conference can happen if branches representing 25% of the membership sign up to a letter demanding the General Secretary calls it. Otherwise, branches holding Autumn General Meetings may wish to agree motions to put to the NEC. Though these appear on the NEC agenda only for noting, enough branches making the same demands will have to be seriously considered.

We urge all reps reading this to raise the matter for discussion with their Branch Executive Committee. If your BEC is willing to back either approach (or both) then contact us so that we can ensure branches who agree with this call are working together.

One thought on “The Pay Campaign – What Next?”