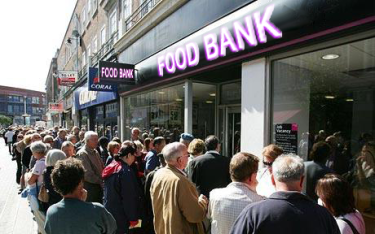 The Guardian reports that UK’s largest food redistribution charity is helping to feed 772,000 people a week – 60% more than the previous year. Of course that number will include PCS members.

In the article the paper states that a staggering one in eight people in the UK go hungry every day at a time, according to the official figures, of very high employment in the UK.  This shows in a different way that pay has not kept pace with inflation.

Of course if this level of hunger is the case in so called ‘boom’ times, what will happen when the boom goes to bust – as always happens in capitalism. The one in eight figure will become one in seven etc and food banks will feed a million plus or more.