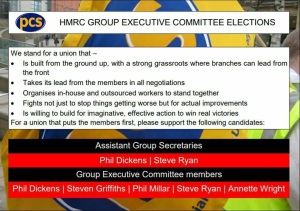 A small group of independent socialists is standing for election to the HMRC Group Executive Committee. We are standing because we believe we can bring new ideas and enthusiasm into the Group leadership at a time when it is sorely needed.

Low pay in HMRC has reached the point where the Department had to give AA grade staff an additional uplift in order to meet the minimum wage it is supposed to enforce. The AO grade is not far off the same fate, whilst even at higher grades the pay cap continues to bite.

The office closure programme continues at pace, with the department shedding 75,000 years of experience through redundancy in 2017. The fact that there will be glaring gaps in compliance coverage around the UK has done little to stop the rot, nor the realisation that even as jobs are going Brexit will require an additional 5,000 staff.

Privatisation, and with it terminal low pay and appalling conditions, are rife across the estate. HMRC wants to shed its in-house security provision and have private companies take on the role. Our mail services have already gone over to the private sector. Overworked and underpaid cleaning staff are struggling to offer the bare minimum standards whilst their bosses make off with taxpayers’ money.

All of this is just the tip of the iceberg. The question is, what do we do about it?

Building strength in workplaces – The union’s strength is its members, and we are at our strongest when members and branches have the confidence to lead from the front. This means an organising strategy built around emboldening the workforce.

Taking the lead from members – The union’s negotiators have to be accountable to members. This means that instead of talks taking place behind closed doors and in confidence, they need to be done out in the open. Members should be kept up-to-date and they should have the final say on whether what we get out of management is good enough or whether we need to take action in order to push further.

Organising in-house and outsourced workers together – Some of the most inspiring victories that the union movement is winning of late are with precarious and low paid workers, more often than not outsourced. There are plenty of such workers on the HMRC estate, and we need to be organising them alongside civil servants and taking inspiration from the strategy and tactics pursued by other unions to build leverage and win their demands on pay and conditions.

Fighting not just to stop attacks but to win improvements – HMRC staff are under attack on a number of fronts. But that doesn’t mean we need to always be on the back foot. Rather than fighting to stand still, we need to ensure that our resistance to the employer’s attacks is rooted in demands for tangible improvements. When they say that we’ve got too big a slice of the pie, we need to be pointing out that we’re the reason there’s a pie at all and demanding more of it.

Effective, imaginative action – If we take strike action, it should be unapologetically aimed at disrupting the businesses. We can protest on our own time but strikes need to be more. We need real strategies to hit peaks, prevent the department from hitting targets and to slow things down on the job – unless HMRC are willing to give us what we want.

Building a real opposition – Over the past few years, the number of people willing to stand for the GEC has dwindled to the point that in the 2017 elections just one person lost out in the vote. The Group faced the real risk of uncontested elections for the leadership.

Such a monopoly is not good for any organisation. It serves only to stifle debate, discourage new activists from coming forward and offers up only a stale complacency.

It is our hope that seeing an independent group standing will encourage others to contemplate doing so in the future. We want more people to stand; people who do the work have important knowledge and experience to offer to the union and the union badly needs new ideas – which often come from newer reps rather than those long immersed in ‘the way things are done’.

If you agree with all of the above, then please support the following candidates in the HMRC Group Elections: