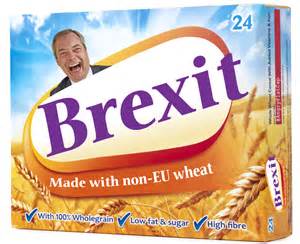 So, the UK is now to leave the European Union in pursuit of its own interests and separate from any other interested parties.

During the debate many Brexiteers accused the Remain camp of scaremongering on the economic arguments. Their economic insight was laid bare within seven hours of the result being announced for Brexit. The value of the pound plummeting in the hands of arbitragees.

A huge drop in City trading, not just on the FTSE 100 for the largest companies (many multi nationals), but much more worrying and relevant to working people the FTSE 250 that of medium and moderate sized companies, with responsibility for large swathes of the British working public.

You may not consider either of these aspects of the result very important. You may wish, at some point, to consider your pension arrangements, then you will see the blight that has been visited upon the British public by this act of pure self serving vandalism.

There have been previous self serving blights laid upon the British public by the Tories, it is therefore, quite sad that once again the British working class have allowed themselves to be mugged in this manner. In 1992 under the Major administration a pensions holiday was allowed to all business’ as pension funds were so substantial as to offer a considerable threat to the Tory parties ability to maintain a workforce for their grasping greedy selves. But not only was a pensions holiday granted, but businesses were given permission to access these funds and take a “loan” from them so long as these funds were returned within a specified time frame. And yet, surprisingly enough most of the big businesses availed themselves of this access only at the end of the term of the loan to declare they had no means to return the funds borrowed from their workers.

They then went on to make the false accusations that the pension funds had huge black holes in their resources and that these Final Salary schemes should be closed. So, an employer payment in to worker pensions holiday was granted, access for loans to be taken was granted but the return of such funds to the workers was never ever made. The most serious and thieving aspect of this was that big business, backed by Tory MPs, could  declare that pensions, having been raided, were not sustainable. This lie was allowed to be propagated and dealt with as fact. And now with the largest fall in city trading for over 30 years, as a consequence of the Brexit vote, workers’ current pension arrangements are now, again, under attack by city trading.

The very same Brexiteers, who in government, advocated for and enacted the demise of the civil service, will now require that very same decimated civil service to negotiate, on its behalf, the Brexit requirements of the new arrangements. Civil Servants, such as those in the Department for Communities and Local Government, who had responsibility for dealing with the vast swathes of financial support and grants directed to Britain from Europe will now face an “about face”. Whereas, for forty years they have been (in this and predecessor department guises) directly dealing with our European partners and dispensing the largesse from that quarter they will soon have to negotiate the UK’s ‘divorce’ from the EU.

Given the huge attacks on the civil service and the masses of jobs that have been thrown away there will also have been a massive dimunition in the skillsets required for this huge and difficult undertaking. This will be required of Civil Servants whilst they maintain their ‘pro –European’ stance for the period and terms of the Article 50 European engagement. So with a reduced civil service complement, and all that that brings in terms of not only man hour capability but also experience, the Brexiteers will expect them, the civil service, to negotiate for and on behalf of Britain, at the same time. Workplaces and staff are already overstretched with the reductions in staffing levels whilst the work loads remain consistent. Now that the workload will be both for and against European conduct in the next two to five years will this mean that there will now be recruitment of civil servants ? Don’t believe it, and if it was, would those recruited have the necessary skill sets to address what will be a new and hugely convoluted process.

You may expect that given this massive change that their will now be a huge and substantial support network put in place by the Brexiteer politicians to ensure that their wishes as granted are now effected. Sadly, your expectations will be rapidly disavowed. Look at each of the Brexiteer candidiates and you will see huge billowing clouds of hot air, but even as ministers and mayoralty, they failed massively and significantly on the one issue that will determine the success of this gamble into the darkness, DETAIL. Not one of the Ministers, MP’s or even the ex-Mayor of London can claim that they have any idea how the actual nuts and bolts of this shambles will play out. Nor do they particularly care I suspect.

As with previous Tory projects, such as the pensions smash and grab from the Major era, this will be more about individual greed on the part of the Brexiteers who will use a smokescreen of ‘British sovereignty’ to cover up any financial rewards they have more than likely already identified, and the only details they will have paid attention to is how to secure that. One at least can see his pay off as the role of Prime Minister and how that will feed his huge vacuous ego. The others we are yet to see, this will be played out in the months and years to come. One thing is for certain the re-arranged pensions of working people will be raided and re arranged yet again, and to their detriment.